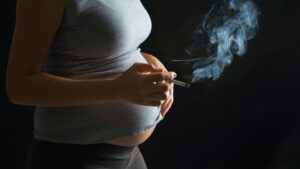 Nicotine and tobacco are one of those discoveries that man made intending to use for good, but sadly ended up giving them a bad purpose, leading to a lot of harm, side-effects and, undeniably, the loss of life of many who consumed them.

What makes nicotine tobacco even more dangerous is the fact of how it can affect you passively.

So let us all yell ‘Hurrah’! A toast to the element of man’s extinction!

It remains a joke that the reason for widespread usage of cigarettes is media and at the same time we have the same media warn us that smoking causes cancer.

In 2015, 15.3% of women from the U.K were smokers. According to the Centers for Disease Control and Prevention, in 2016 13.5% American women smoked. And the funny thing is that while the number continues to grow today.

But we’re not here today to talk about women smoking cigarettes. It is their choice whether they wish to lose their life slowly like male smokers or if they choose to quit it for the better. We’re here to talk about all those selfish pregnant mothers who instead snatch that choice from their child and drag their child with them as they travel to every smoker’s oblivion. We’re here to warn those pregnant mothers of how smoking can have malevolent consequences on their foetus, if pregnant, or baby, post pregnancy; about the Effects of Smoking during and post Pregnancy.

Pregnancy is a beautiful stage in every women’s life. It is the only period of time when a mother does not hesitate to sacrifice and is willing to bear pain, not for her sake but for the child growing inside of her.

But some mothers tend to ruin this beautiful time of bonding with their child by bringing in bad influences, and by bad influences I mean ‘El Cigarette and his Evil Compadres.

A effects of smoking while pregnant does not only ruins mothers  health but also that of her baby. Smoking released a lot of harmful and life-threatening chemicals which are set to ruin the child by creating serious health and physiological complications. Smoking, for a mother, is kind of like the mother releasing a bio-weapon into her womb. But we haven’t even gotten into the details yet! Let us now dive into the exploits of El Cigarette and his Evil Compadres!

The Exploits of El Cigarette and his Evil Compadres

Scientists have found about 4000 harmful chemicals in cigarette. But El Cigarette only needs 10 of his lackeys to claim his domain. They are: Nicotine, Lead, Benzene, Tar, Formaldehyde, Arsenic, Cadmium, Carbon monoxide, Hydrogen cyanide and Chromium.

Together with his Evil Compadres, El Cigarette reigns not only over your body but also your mind, thus making him look irresistible and addictive. He puts you on a spell, making you dependent on him.

Now imagine him having taken over a pregnant mother. His domain extends not only to the mother but also to the child he bears. But it does not end there. El Cigarette also tries to affect the people around the smoker, making them passive smokers, and him extending his kingdom.

Now we’ve had enough of analogies. Let us dig deeper into the medical effects of smoking.

Effects of Smoking while Pregnant:

We have quite a clear idea of what effects of smoking while pregnant does to regular smokers. But let’s discuss how smoking affects the mother and the unborn child in the mother’s womb:

It is when a fertilized egg implants itself in the mother’s abdomen or fallopian tube instead of the Uterus resulting in life-threatening consequences for the mother.

It is when the placenta detaches itself from the uterus resulting in severe complications in the mother and foetus.

It is when the placenta covers the opening of the cervix and its rupture leads to severe bleeding and lack of oxygen and nutrients to the foetus.

The death of the foetus in the womb after 20 weeks of pregnancy.

Yes , smoking can cause miscarriage. The death of the foetus in the womb before 20 weeks of pregnancy.

It is when a baby is born too early causing it to be underdeveloped.

It increases the risk of being born with disabilities and medical complications.

Even if a mother manages to temporarily skip smoking during her period of pregnancy and resumes it post pregnancy, it has maladaptive effects on the baby. The poison manifests in the breast milk and via passive smoking. The harmful chemicals of cigarette travel via breast milk into the baby, thus affecting it.

Cigarette affects the body at the roots, meaning the genes. So it is capable of creating genetic anomalies which transfer through generations, even if the second-generation mother is not a smoker.

Asthma, cancer and disability are just a few things that reach the descendants of ‘the mother who smoked during her pregnancy’.

A mother’s guide to saving her fetus:

“It won’t be easy.” Overcoming any form of addiction takes a lot of will power and the art of distracting oneself. Pregnant or breast-feeding mothers are not advised to rely on nicotine replacement therapy.

So all smoking pregnant mothers need to do it the old-fashioned way. It is advisable that pregnant mothers distract themselves with hobbies, work and exercise. It is important to remember that even a single cigarette can cause harm. But at the same time don’t lose hope if you have already smoked during your pregnancy, start cutting out on cigarettes from now; it’s never too late to do the right thing.

You can also check how to quit smoking step by step and what can be consequence once quit smoke completely…so it help you to get rid of this bad habit.

Show El Cigarette the power of motherly love; how you are willing to save your child from the danger he and his Evil Compadres pose. True women empowerment begins when a woman understand the effects of cigarettes while pregnant and breast-feeding and stands up against a man trying to dominate her; a man who goes by the name ‘El Cigarette’.