Pani Puri goes by many names in India, including Gol Gappe, Phuchka, Pani ka Bataasha or Patasha, Gup Chup, Phulki, and Pakodi. These are just a few of the most popular names for the Pani Puri snack. Crispy potato dough dipped in a hot jal jeera and meetha chutney.tiny and unassuming

Pani Puri reigns supreme in the world of Indian street food. The classic Pani Puri will never let you down, whether you get it from a sketchy street vendor or the chaat stand at a wedding reception.

Nonetheless, where did this wonderful food item originate?

Pani Puri‘s history isn’t readily available on the internet, which is a shame. It’s not clear who should get credit for what, much like the concept of “zero” or “patriarchy.” All we have to go on are the stories surrounding the dish’s origins, one of which claims that it originated in the ancient Indian kingdom of Magadha.

Magadha was one of sixteen Mahajanapadas or “great kingdoms” of ancient India. Its current location is in southern Bihar. The exact date of its existence is unknown, but it is reputed to have been around before 600 BCE. One of the most important regions in India’s history, Magadha, was the birthplace of Jainism, Hinduism, and Buddhism.

According to legend, Pani Puri in the Magadha kingdom was reportedly slightly different from the dish we know and love today. Ancient Pani Puris, known as “Phulki” (a word still used to describe Pani Puris in some parts of India today), were made with smaller, crispier puris. Exactly what they were originally filled with is a mystery, but one can assume it was some sort of potato curry (curry).

On the other hand, Pani Puri is said to have its origins in the Indian subcontinent. The Pani Puri was supposedly invented by Draupadi in the Mahabharata. While Draupadi and Kunti were exiled in exile following the loss of their kingdom to a dice roll, Kunti threw Draupadi a test. In order to feed the five of them, she gave her some leftover aloo sabzi and a small amount of dough. Draupadi’s response to this challenge is unknown; some accounts say it was to see if Draupadi would be a good housewife, while others say it was to see if Draupadi would favour one of her brothers over the others. Draupadi came up with Pani Puri in response to Kunti’s challenge. She was so impressed by her daughter-in-law’s that she bestowed immortality on the dish.

Is it possible that an ancient Magadha citizen is to be credited with the creation of Pani Puri? Is the story from the Mahabharata a way to explain the existence of this dish, or did Draupadi invent it after being challenged by Kunti? We are unable to provide an answer at this time.

Is Pani Puri a delicacy that we’ve all been craving? Definitely.

Chaat and Bhel Puri, Pani Puri are three popular Indian street food dishes that are easy to prepare at home, but what about when you need a quick fix and want to impress your guests? Bhel puri can be made at home in a variety of ways, including the following: 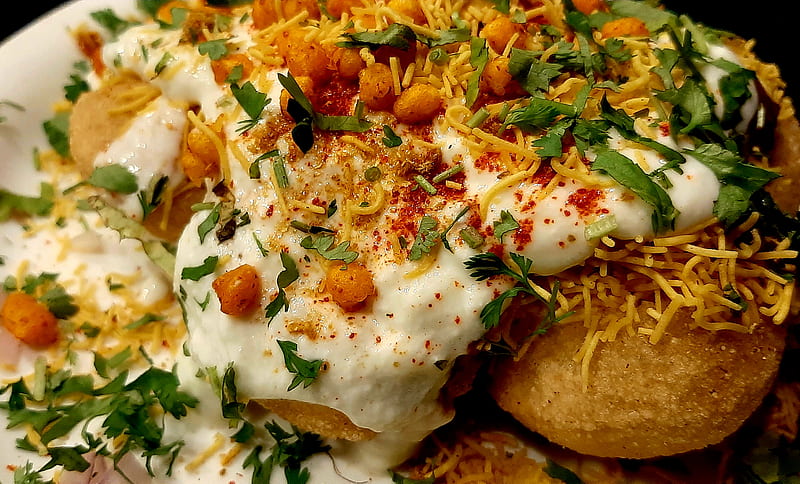 Once you’ve found the right murmura or puffed rice, the next step is to cook it. You can rely on Ganesh Bhel for the freshest and cleanest Bhel around. If you want to make sure the Bhel is fresh, throw it around a few times before using it.

The next step is to prepare the main ingredients. Bhel Puri would benefit greatly from the addition of some boiled and chopped potatoes, onions, and tomatoes. You can also add a small amount of finely chopped green chilies and a small amount of finely chopped coriander leaves. Toss the bhel with all of the ingredients listed above. You must, however, be careful not to break the delicate and crunchy grains of the puffed rice, as this is where the fun lies.

You can also add some lemon juice, a few crushed papdis, mint chutney, and tamarind chutney and toss again after you’ve added the chopped vegetables. Slowly mix from one side to the other with a spatula, making sure to avoid making the mixture too runny. The level of uniformity should be perfect. Sea salt to your preference.

Finally, add pomegranate and sev to the dish as a finishing touch. Before serving Bhel Puri, garnish the dish with a few more coriander leaves. Chaat masala, black salt, cumin or jeera powder, and some chilli powder can also be added to the mixture.

Bhel puri should be served with condiments and chutneys on the side so that people can customise their dish to their liking.